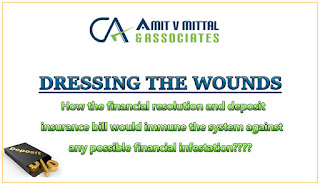 How the financial resolution and deposit insurance bill would immune the system against any possible financial infestation????

The problem of the Non-Performing Assets (NPAs) has been haunting the Indian economy for quite a long time now. It’s because of this problem that some of the biggest banks of the Indian economy have undergone huge losses to such an extent that they lost the position that they earned in all these year.
The piling bad debts have not only disfigured the balance sheets of the banks but have also muddled the growth of the India. The banks are now forced to adopt a skeptic approach while lending. As a result of which some of the potentially productive avenues remain unexplored.  Hence, it became really important both for the banks as well as the economy to adopt a quick NPA resolving process. With an aim to develop such process, the government approved the Financial Resolution and Deposit Insurance Bill (FRDIB), 2017. The new framework is expected to resolve compliances relegated to speedy winding up of NPAs and to efficiently redeploy the capital in further productive avenues.
RBI seems to be committed to resolve this high resolution process. In view of which, it identified 12 loan accounts which are to be referred to the National Company Law Tribunal for insolvency and bankruptcy proceedings. These accounts have a net balance of Rs. 25000 crores. Obviously, treating them would be an expensive affair and would affect the financial position of the bank and the bank would require additional funds to continue their operations. Besides this, this bill will also provide deposit insurance to consumers of some specific categories of financial services up to a reasonable limit and would also monitor the Systemically Important Financial Institutions (SIFI).
While the Insolvency and Bankruptcy Code (IBC) 2016 enables both identification and resolution of NPAs, a bill like this might be proved significant to identify the underperforming banks and would enable the government to take long-term cost-effective corrective measures. Besides this, most of the businesses dealing in financial services and operating in the current market scenario carry an intrinsic risk due to the increased dynamicity of the global political and financial landscape. Hence, by covering financial institutions this bill would provide timely solution to the stakeholders of these businesses which would improve the productivity and performance of these businesses. Moreover, this bill has been designed to identify the risk of business failures while implanting discipline among such businesses in the event of any financial crisis by capping the amount of public money that can be allocated to revive the shaky institutions.
By limiting the exposure of public money, addressing the risks well in advance and by providing essential corrective measures, it’s hoped that this bill would bring much sought after financial stability in the economy in long run. Further, it aims to strengthen and consolidate the current framework of deposit insurance to benefit the retail depositors.
However, there is still a need to have a comprehensive NPA resolution framework, in order to counter any probable financial crises in the financial institutions, bankruptcy of banks, insurers and other firms providing financial services, and to safeguard the financial system from any unforeseen systemic crises and protect consumers. The government might be waiting for the clean-up process to commence and observe how the things go under the current framework.

Posted by silverbucks at 04:54 No comments: 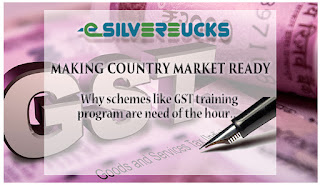 Why schemes like GST training program are need of the hour…..

Whenever a big change takes place in the system, it requires a lot of understanding and preparation to ensure a smooth implementation of the same. The Government of India is also trying to create awareness among the masses about the newly implemented Goods and Services Tax (GST). In order to ensure this the government has launched a GST training program under which it aims at training over two lakh youths in six months to make them able to cope with various GST compliances.
This scheme has been launched under the Pradhan Mantri Kaushal Vikas Yojana (PMKVY) and would be catering the need of GST trained professionals to help the businesses in operating under the new regime. This scheme would be launched in the ITIs across 14 states and is expected to employ around 2 lakh youth.
Schemes like these hold a great significance in a country like India where the population is so huge that it’s practically almost impossible to give everyone a government job. Besides this, sometimes even the market conditions and some policy paralysis also halt the dream of youth of getting a reputed job. Consequently, many end up getting underemployed or even unemployed.
While lakhs of students pass schools and colleges, most of them are unemployable due to lack of required skill to work in the market and real life situations. As per the recent survey as much as 93% of the B-School graduates were unemployable earning only 7-8 thousands per month after spending lakhs on their education.
Hence, it becomes very important for the government to concentrate more on developing the skills of the youth. So, that the institutions of our country produce market ready professionals. However, the infrastructural condition of these institutes is also a matter of great concern for many. The problems faced by the students due to the lack of basic infrastructural facilities in Industrial Training Institute (ITI) are frequently reported. Besides this, many premier institutes also lack basic amenities which hinders their learning process significantly.
The lack of skilled workforce has some devastating effect not only at an individual level but also affects the growth of the country! There are a lot of projects which suffer due to unavailability or completely lack of skilled labor. As per some reports the country has 15,000 km of gas pipeline and an additional 15,000 km are planned to be added for which the country would need more skilled labor.
Hence, the government must ensure that it provides such institutes with sufficient funds to bridge the gap between the demand and availability of skilled labor. Moreover, the government must also make sure that programs like GST training program are being conducted seriously and do not end up being a meagre lip service. Recently, we have seen a major chunk of the government budget being allotted to the appeasement schemes and subsidies. Whereas, we firmly believe that if the same money is used for the skill development programs, it would yield much productivity to the country in the long run.


Posted by silverbucks at 02:01 No comments: